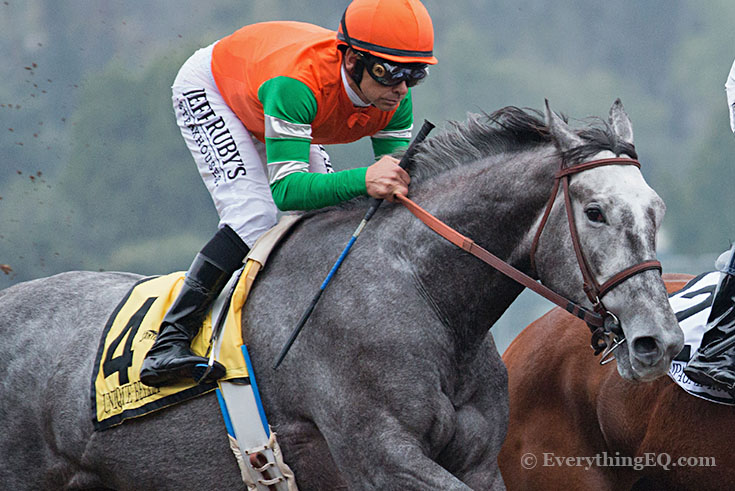 Don Alberto Stables’ talented sophomore filly Unique Bella faced a challenge for the first time Saturday, March 4, but shrugged it off as if it were nothing as she went on to win the $100,000 Gr.3 Santa Ysabel Stakes at Santa Anita Park with plenty of room to spare.

Tap It All sped out of the gate to take the early lead while Unique Bella broke slowly from the inside post under Mike Smith but the initial leader was not able to maintain the position for long. Unique Bella was in between horses into the first turn, running through the middle of Tap It All and Spooky Woods to gain her position in front in time to hit the clock in :23.35 for the first quarter. After a half in :46.23, the Tapit filly was 3 lengths in front and by the six furlong mark had extended that lead to 5 lengths. Abel Tasman, who was running near the back of the field of six in the early stages of the race, began to make her move under Joe Talamo. The Grade 1 winner came within a length of Unique Bella but could not get any closer than that; under left hand urging, Unique Bella gained another gear and pulled away in the last furlong to hit the wire 2 ½ lengths ahead.

“It was pretty eventful,” Smith said following the race. “Sometimes you just stay out of the way of the good ones and they’ll run for you. That’s pretty much what I did today… I was blessed enough to be able to lead my way out.”

Abel Tasman held on for second. Spooky Woods finished another 8 lengths behind her in third.

“We have a very talented filly and we’d like to look at the Kentucky Oaks,” said trainer Jerry Hollendorfer. “We like to take one step at a time. We’d like to go for the Santa Anita Oaks, and if we win or do well, then we’ll try to go to Kentucky.”

Farrell and Unique Bella each have 70 points on the Road to the Kentucky Oaks, putting them at first and second place on the leaderboard.

From five career starts, Unique Bella boasts four wins and a second. The Santa Ysabel was the fourth consecutive victory for the filly. She broke her maiden at second asking and moved to stakes company, taking the Gr.2 Santa Ynez Stakes in January and the Gr.2 Las Virgenes Stakes in February. The Santa Ysabel boosted her earnings to $342,400.

Unique Bella was bred in Pennsylvania by Brushwood Stable and is out of the Unbridled’s Song mare Unrivaled Belle. He was consigned by Eaton Sales at the 2015 Keeneland September Yearling Sale, where Don Alberto Corp. purchased her for $400,000.

“When we got to the stretch, Mike told me he was looking around, but when he asked her she immediately responded,” stated Fernando Diaz-Valdes, Don Alberto’s racing manager. “It was a little slow. I would think the pace would have been a little bit faster. I was expecting more speed. Finally it’s one step closer with what we want to do with her. I think the Santa Anita Oaks for sure.”