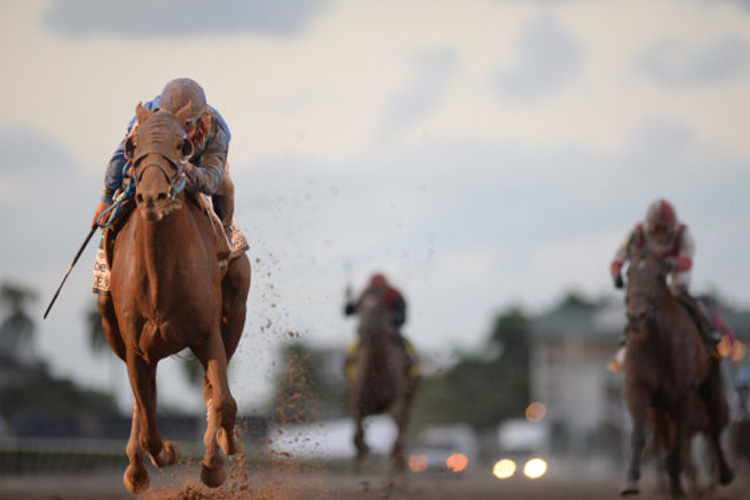 Peacock Racing Stables’ multiple graded stakes winner Gunnevera descended from the sky on Saturday, March 5. The chestnut son of Dialed In flew from last to first in a very impressive performance to take the $400,000 Gr.2 Fountain of Youth Stakes at Gulfstream Park by 5 ¾ lengths.

Out of the gate, race favorite Irish War Cry attempted to take the lead but was instead forced to press Three Rules through an opening quarter in :23.43 and a half in :47.18. Practical Joke made a move in the far turn, coming up to challenge Three Rules while Irish War Cry faded. Meanwhile, Gunnevera, under jockey Javier Castellano, flew from last to first going three-wide. He continued to coast to the wire from there, finishing the 1 1/16th miles in 1:44.25 over a fast track.

“I feel very happy,” said trainer Antonio Sano. “The last race he lost because he got bumped [on the turn into the stretch]. This was different – more horses, different speed. Jockey Javier [Castellano] told me, he did it very easy.”

Gunnevera is Sano’s first horse on the Derby trail, and vaulted to first place on the leaderboard with 64 points on the Road to the Kentucky Derby.

“He’s a 3-year-old horse but he acts like a 6-year-old. He’s an old pro,” Castellano said. “The way he was in the post parade, he was very composed and he waited in the gate. He broke from the gate, and I could have been a little closer to the pace and chased a little bit to secure my spot in the first turn, but I didn’t. I took my time with him. I let him follow the pace and he started picking it up little by little. Turning for home, I knew I had it. I knew because of the way he did it when I asked him. He responded very well.”

Gunnevera was bred in Kentucky by Brandywine Farm and Stephen Upchurch. He is out of Unbridled Rage, a daughter of Unbridled. Sano acted as agent to purchase the colt for $16,000 at the 2015 Keeneland September yearling sale.

From 8 career starts, Gunnevera boasts 4 wins and 2 seconds for earnings of $1,075,200. His other stakes victories include the Gr.2 Saratoga Special and Gr.1 Claiborne Breeders’ Futurity.

Gunnevera is likely to start in the Gr.1 Florida Derby next month.