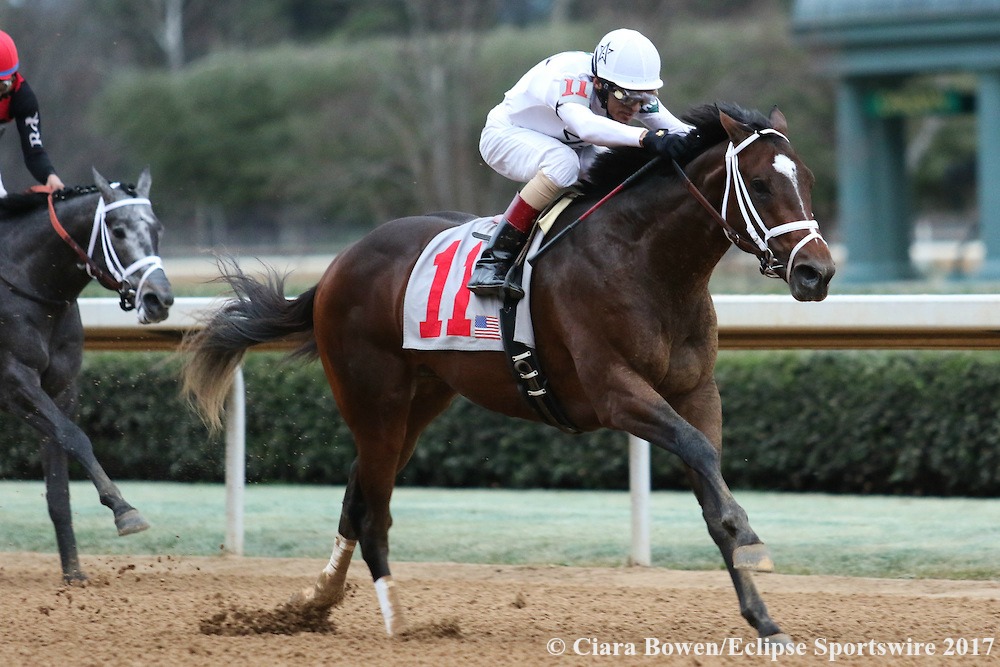 Winstar Farm, China Horse Club, and SF Racing’s lightly raced One Liner stepped up to stakes company with no issue Monday, February 20. The bay colt was impressive in just his third start, winning the $500,000 Gr.3 Southwest Stakes at Oaklawn Park by 3 ½ lengths.

Smarty Jones Stakes winner Uncontested seized the lead from the start of the race, leading the field through a quarter-mile in :22.93 and a half-mile in :46.55 under jockey Channing Hill. Petrov ran along in second while Warrior’s Club and One Liner occupied the third and fourth positions respectively. As the field ran through the far turn, Petrov challenged Uncontested, who surrendered his position, and took the lead as the field turned for home. One Liner, with regular jockey John Velazquez aboard, moved up to contest Petrov in the early stretch. Those two quickly turned the race into a two-horse show, battling further into the stretch before One Liner shook his rival at the sixteenth pole and drew off for the win.

“I’m very pleased with his race. He handled things very professionally,” trainer Todd Pletcher said. “He shipped and settled in well. It looked like he finished strong and may have left something in reserve, which is encouraging.”

The Southwest is one of many races on the Road to the Kentucky Derby, which determines which horses make it to the Derby field. It awarded points on a 10-4-2-1 basis, putting One Liner at ninth place on the leaderboard.

The three-year old son of Into Mischief debuted last summer with a solid length and a half victory in a six furlong maiden special weight at Saratoga Race Course. He did not start the remainder of the year, and made his sophomore debut January 26 at Gulfstream Park in another six furlong contest. The Southwest was his first stakes attempt and first time going two-turns.

“We knew he would come out running with this being his first time around two turns,” Velazquez said of his mount. “I just wanted to save something for the end and I didn’t want to rush him. He broke real well and once he got around the first turn he relaxed for me. By the time we got to the 3/8th pole I had to get aggressive with him and let him know it was time to get busy. Then he got competitive. From there, I knew he had it won.”

“He had shown a lot in his training before he even debuted at Saratoga, so we weren’t surprised that he won at first asking,” said trainer Todd Pletcher. “We had to give him some time after that race because of some baby issues, but he came back very good and has been training good, so we were confident in him. At this point I’d say everything is in play (for his next race).”

One Liner was bred in Kentucky by Kingswood Farm and is the first starter out of the Cherokee Run mare Cayala. He was consigned by his breeder in the 2015 Keeneland January Horses of All Ages sale, where J. S. B. Stable picked him up for $150,000.