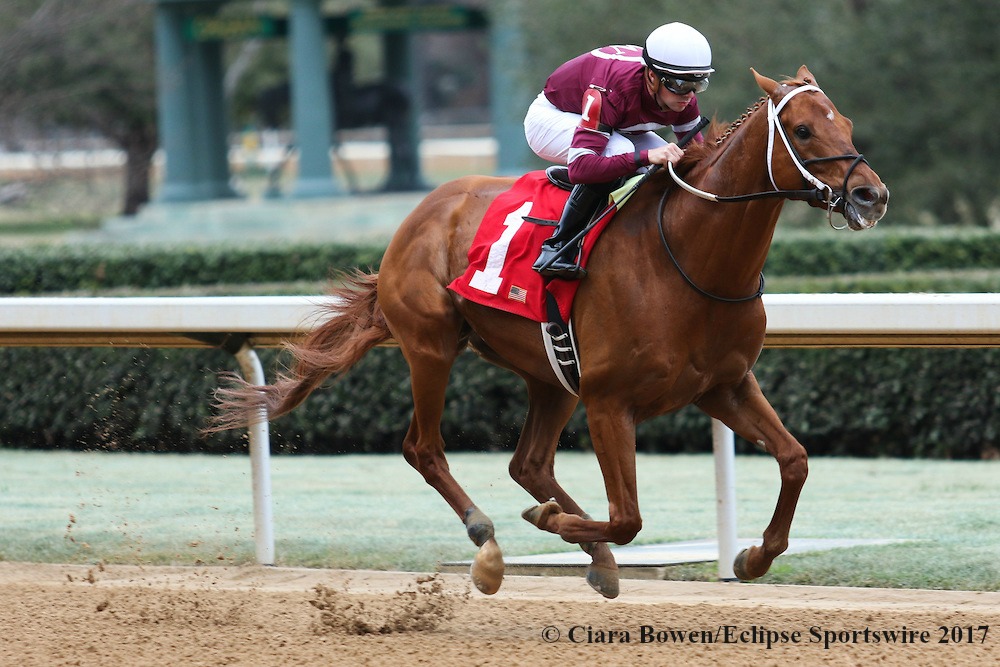 The season debut for Gun Runner was highly anticipated and the chestnut colt did not disappoint Monday, taking the $500,000 Gr.3 Razorback Handicap in scintillating fashion. A large crowd braved a forecast promising rain to see the race, casting glances at the sky frequently, but the weather was forgotten as they watched the performance before them.

Gun Runner, with Florent Geroux up, broke sharply and snagged the lead from the gate. Blue Tone was a step slow from the gate but was not deterred, rushing up to the leader to put on a bit of pressure from behind as they went through the opening quarter in :23.18. Domain’s Rap ran along in third, moving out toward the center of the track in the backstretch and Hawaakom moved up in his position. Up front, Gun Runner hit the half-mile mark in :46.88. The field entered the far turn, and without any urging, the leader began to draw away, taking them the rest of the way with no contention. He hit the wire 5 3/4 lengths ahead, followed by Hawaakom and Domain’s Rap in second and third respectively.

The final time for the 1 1/16th miles was 1:40.97 over a fast track, just two-fifths of a second off the stakes record held by Lost Code.

“This horse just gets better and better,” Geroux said. “He was in every fight last year and he feels even better this year. I’m hoping the sky’s the limit for him.”

Four-year old Gun Runner was initially scheduled to start in the $12 million Gr.1 Pegasus World Cup Invitational Stakes at Gulfstream Park on January 28, but was forced to miss the race due to restrictions put in place on horses stabled at Fair Grounds Race Course & Slots after the outbreak of equine herpesvirus Type-1 there.

Gun Runner won the Gr.2 Risen Star Stakes and Gr.2 Louisiana Derby last spring at Fair Grounds and went on to finish third in the Gr.1 Kentucky Derby. He went on to win the Gr.3 Matt Winn and additionally placed in three other graded events through the year, capping his season off with a win in the Gr.1 Clark Handicap. Monday’s victory improved his record to 7 wins, 2 seconds, and 2 shows from 13 starts, with earnings of $2,337,800.

“Last year we learned to let Gun Runner just be Gun Runner and the success has come to him,” said Steve Asmussen, who trains the colt for owners Winchell Thoroughbreds and Three Chimneys. “With his pedigree and his Grade 1 win last year, it’s very sporting of them to give us another year. He’s a fast horse. We’re very happy to get this race done. We’ve always been confident that this horse would get better with time.”

Bred in Kentucky by Besilu Stables, LLC, Gun Runner is by Candy Ride and out of the Giant’s Causeway mare Quiet Giant.