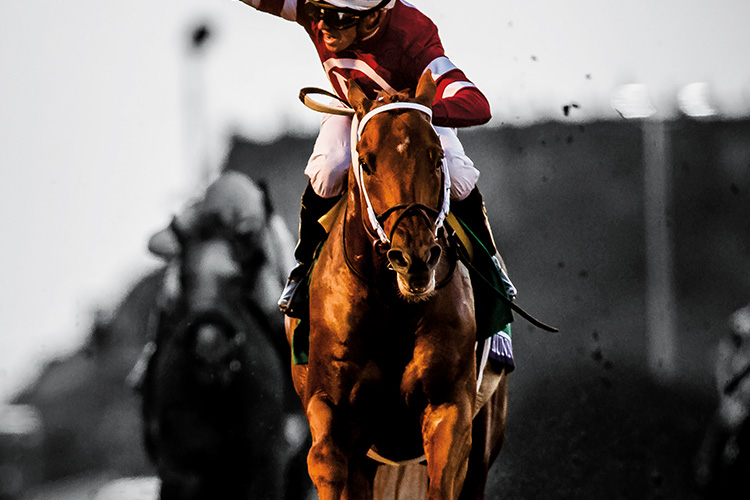 Congratulations to the connections of Gun Runner, 2017 Older Dirt Male and Horse of the Year Eclipse Award champion. Read “The Rise of Gun Runner” for a closer look inside his impressive record and relive his championship victory in the Breeders’ Cup Classic.

On the evening of November 4th, 2017, as the field for the Breeders’ Cup Classic made its way onto the track at Del Mar Thoroughbred Club, Florent Geroux sat quietly atop the horse he had ridden for nearly two years. Gun Runner showed nothing but class in the post parade. He was quiet, but focused on the task at hand. Seemingly on cruise control, the son of Candy Ride (ARG) and Quiet Giant (by Giant’s Causeway) loaded into the starting gate off a three race win streak consisting of the Gr.1 Stephen Foster, Gr.1 Whitney and Gr.1 Woodward. Arrogate, the horse who had romped past him in Dubai to deny him a victory, stood to his far left, waiting to run the final race of his career. A win in the Classic for either of them was to determine end of the year honors. As the two rivals prepared to square off, doubt ran rampant throughout the grandstand. Gun Runner was 0-3 at the 1 ¼ mile distance and had lost two of those starts to Arrogate; could he possibly have improved that much since Dubai to win the championship? Would the real Arrogate show up, or was everyone in for a repeat viewing of the San Diego Handicap? The crowd grew anxious.

Suddenly, the gates swung open and they were racing. Gun Runner broke sharp and Geroux positioned him to set the pace. Two of Bob Baffert’s entrants followed closely behind the chestnut as the field went into the first turn, but neither one his rival. Arrogate had departed the gate awkwardly and was laboring in eighth as the lead blew past a speedy 22.50 opening quarter and 46.31 half. It was clear going into the second turn that he would not be joining Gun Runner up front in the stretch. Instead, Collected had stepped up to challenge and his effort was admirable. But he was simply no match. As the two rounded into the stretch, Gun Runner dug deep and the grit he had flashed as three-year-old at Fair Grounds on the Kentucky Derby trail was on full display once again. Victoriously, Geroux threw his hand in the air as the two hit the wire 2 ¼ lengths in front of Collected in a final time of 2:01.29 and galloped out strongly, ahead of West Coast (third) and Arrogate (fifth). War Story was fourth.

“The Rise of Gun Runner,” written by Claudia L. Ruiz, was originally published in the Winter 2018 issue of Thoroughbred Today magazine. Read it in the magazine → CLICK HERE