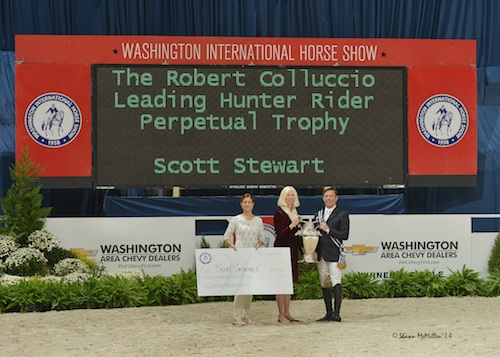 A Million Reasons, a nine-year-old Holsteiner mare by Coriano, is a brand new ride for Stewart as of just this week. She is owned by Maura Thatcher’s Pony Lane Farm and was leased to show.

“We tried her last week at Harrisburg. I jumped three jumps with her, and they were nice enough to let Betsee lease her,” Stewart explained. “Originally, the horse came from Larry (Glefke) and Kelley. I never jumped a line until yesterday, and she was amazing. She was so easy, but I was obviously nervous having never done anything with her before.”

A Million Reasons showed in Harrisburg with Maggie Jayne and was ready to go for Stewart this week. Although he does not know her well, the mare was unfazed by the impressive venue and change of rider.

“So far I think she is the easiest horse I have ever ridden,” Stewart acknowledged. “I think she goes exactly the way you want her to go. She is beautiful, she moves great, she is scopey. I have watched her go for a couple of years and I didn’t realize she would be available, so it is great.”

Continuing the day, Stewart went on to win the Green Conformation Hunter championship, sponsored by Mr. & Mrs. John R. Ingram. He guided Dr. Betsee Parker’s Lucador to top honors after placing first, second and second over fences and winning the under saddle. The pair also won Tuesday’s model. For the championship honors, they were presented with The Valiant Hark Memorial Challenge Trophy, donated by Mrs. Stephen J. Clark. California’s John French rode Montana Coady’s Ranger to the reserve championship with two wins and a second place finish over fences as well as second place under saddle.

Lucador, a six-year-old Oldenburg gelding by Lord Pezi, has been a solid mount for Stewart all year and handles the excitement of WIHS like an experienced veteran at such a young age.

“He has been great, and he is so young,” Stewart said. “I wasn’t sure if I was going to show him this year at 3’6”, but he does it so easy. This is the most consistent he has been. He was first or second in every jump class. I think it came down to the hack. We had to win that to be champion, so it was a tight race.”

“He is really great in the ring,” Stewart added. “He’s a little quirky in the schooling area and he doesn’t like the crowd, so it’s a little hard to get ready, but once he is in the ring he is easy. I literally don’t have to jump a jump with him. I can jump one little jump and go in the ring or not even jump, so I knew he could just go in there and be fine.”

Securing his third championship of the day, Stewart continued on to win the First Year Green Working Hunter division sponsored by Montana Coady. He guided Stephanie Danhakl’s Quest to the win after placing first, second and third over fences. Nilani Trent’s Autumn Rhythm and Sloane Coles finished in reserve with first and second place ribbons.

Seven-year-old Quest, a Warmblood gelding by Verdi, shows in the 3’3” Amateur-Owner Hunters with his owner and also had success in Harrisburg. “He just started back showing; he had a little time off, so he was out of the groove, but he was right on track here today,” Stewart noted. “It took him a show to get ready, but he was awesome. He is brave and not spooky. He is basically quiet, so he’s perfect for this situation.”

With three championships under his belt, Stewart was named the 2014 WIHS Leading Hunter Rider, receiving a special $5,000 bonus for the award sponsored by Dr. Betsee Parker. He was also presented with The Robert Coluccio Leading Hunter Rider Perpetual Trophy. This marks Stewart’s eighth time earning the title at WIHS in a long-standing and illustrious professional career. It was a close race with Farmer, who won the award last year, but Stewart got the winning edge.

“We figured it out this morning. Larry and I added up the points and I think Kelley was one point ahead coming into today,” he noted. “It all came down to today.”

The Washington International Horse Show continues on Thursday with the beginning of Junior Hunter competition in the morning and Low and High Junior/Amateur-Owner competition followed by a$34,000 International Jumper Welcome Stake in the afternoon. The evening session will welcome local horse lovers, riders, trainers, and their families for Barn Night, presented by Dover Saddlery, beginning at 6 p.m.The $20,000 International Jumper Gambler’s Choice costume class will be the highlight event of the evening.

For those who cannot make it to the show, it will be live streamed in its entirety, sponsored in part by The Nutro Company, at www.wihs.org and is also available on USEF Network at www.usefnetwork.com.

Jennifer Wood Media, Inc. is a comprehensive public relations and marketing firm for the equestrian industry. Our objective is to create a customized public relations plan to help companies reach their goals.