Phoenix Cooke and Sky’s Burnin Blue: The Rode To The WIHS

The sight of custom wool coolers, exhausted braiders trying to keep their numb fingers making perfectly plaited rows, seasoned horses trying to drown out the sound of the bustling stable area with the sound of their snores. You open your trunk while looking for your boot polish, tossing aside the folder that has endless pages of expired health certificates, entry forms, and if you are like most at these shows, perhaps even your horse’s passport.

Among a sea of bay warmbloods, dragging their heavy polished hooves to the ring looking as if you just woke them from a winter slumber, a little white mare makes her way nervously through the crowd. Standing only 15.3hh, she is tiny compared to her competition. With her pure white coat reflecting the fluorescent lights, her rider’s blue stained fingers hidden under her well worn gloves, Sky’s Burnin Blue and her owner/rider, Phoenix Cooke – age twenty of Chardon, Ohio – step up to the ring to review the course. Holding her breath as the rider before her nears the final few fences Phoenix takes a deep breath and enters the ring with just a few goals in mind – Remember the course. Sit up. Rails up. Ride for mom.

To everyone in the crowd, Phoenix is just a name they haven’t yet seen on the score board that day. Her horse is just another grey and oddly enough, doesn’t have a name you needed to take French 101 to pronounce. The little mare zips around flying more than a foot above the jumps, shying from a crowd she has never seen before, and has people holding their breath assuming this will be a clear round. Unfortunately, some tricky fences lay their claim on the score board with some rails down, resulting in faults. It’s a disappointment for the crowd, but not for everyone else who has been rooting for this pair ever since day one.

Phoenix started riding on a little pony named Tiny Tim, more affectionately known as Timmy (or Timothy during “Pony Moments”). Her mother purchased him out of the paper, from a 20 word ad, believing he was a young child-safe pony. Turns out Timmy was actually closer to the age of 16-18, already considered a “senior”, and it was often hard to call him child safe as he bolted around the ring with a tiny bouncing Phoenix trying to hang on. For many of us, this sounds like at least one pony in our barn; for Phoenix this was her only pony. Timmy is now somewhere around the age of 36 and is still just as feisty as can be.

Eleven days before Christmas, in 2009, Phoenix’s beloved Mother, Debbie, was killed in a tragic car accident. Phoenix’s world crumbled around her instantly. Debbie was one of those women that had a heart made of melted gold, spent every moment with Phoenix and her brother Alex, rescued animals, taught children how to ride, owned a business, and was a certified therapeutic riding instructor.

Phoenix had just gotten her first horse shortly before the accident – a gift from her Mom. She was a big four year old Oldenburg, fancy, talented, and sure to be the horse that Phoenix would accomplish goals of tricolored ribbons and fancy silver trophies. Phoenix confided in her mare, left an endless trail of tears along her mane, and used her to help heal and keep moving forward. She finally found the strength to get back up on her feet and be the strong woman her mother raised her to be. It wasn’t easy, but thanks to this mare, her trainer, and close friends and family she was able to move forward. She rode bravely in the hunter ring on her over-jumping power house of a horse, always having the curious eyes of her competitors sneering and laughing at their green moments together. Not having her mom there to tell her it was ok and to keep trying, she mustered up the courage on her own.

Her mom was known for being that overly excited, jumping up and down, clapping, and crying every time her daughter walked out of the ring – on or off of the horse. Thankfully, her trainer, Stefanie Portman, was more of a friend to her than just a person at the gate saying “heels down”. Stef became the support Phoenix needed when she started to doubt her goals, her ability to ride, and if it was ever going to come together.

Two years ago, tragedy struck again when her young, healthy, beloved mare and best friend, sadly passed away unexpectedly due to a heart condition. Although it had been there since birth, it was unknown and never showed any warning signs. A young girl, heading to college with nothing but the weight of heartbreak weighing heavy on her heart; many assumed it would be too much for someone her age to handle.

That’s when Stef told her to get on her “little grey mare”. Skies Burnin Blue, known around the barn as “Gracie,” came to Stef with minimal training, thin, and not looking like the typical hunter/jumper prospect one would imagine. She was bred and broke to be a western pleasure horse. She has Quarter Horse papers. Her sire, the famous Pleasure horse, Sky’s Blue Walker, wouldn’t even let you near her with a saddle. Having more athleticism than most trainers would desire, she was not an easy horse to train, and in the beginning there were days where she looked more like a rodeo prospect than anything else. Thankfully, Stef is patient, has a down to earth approach, loves a challenge and has the talent to go with it. When Phoenix realized that the horse Stef wanted her to ride was “her!” she flat out said there was no way. But turns out the two were made for each other. Gracie’s history was a little rocky and off path, Phoenix grew up on an out of control pony with a mind of his own and carried the weight of the world on her shoulders with everything she had gone through. Gracie needed someone to give her love and trust, and Phoenix needed a best friend.

It took a while, but Phoenix convinced her Father to buy Gracie. Now, Phoenix and Gracie have been together for a little over two years; first trying their hand in the hunter ring hoping to teach her how to jump and at least go in a straight line. Gracie proved she had more fire in her engine than the hunter ring desired. Last year they started out in the low jumpers, six months later moved up to the 3’, and this year in January moved up to the 3’6’’ Adult Jumpers. This was Phoenix’s first time ever in the jumper ring and doing 3’6’’. Most of us had the luxury of riding that “Saint Horse” in the barn, over the 3’6’’, who taught junior riders the ropes, year after year. Phoenix was on a young, sensitive, green mare.

Fate showed its face as she started winning – and winning a lot. Phoenix & Gracie won at some major shows, qualified for the NAL Adult Jumper Championships and Finals, WIHS Adult Jumper Finals, and beat out some of the best horses and riders in Kentucky this past summer winning the $10,000 NAL/WIHS Adult Jumper Classic out of 68 leading horse/rider pairs. Many of these horses she competes against are ex-grand prix horses, imported, or have at least been doing the jumpers longer than 1 year and 10 months. Gracie being just seven and Phoenix only twenty, these are accomplishments many do not achieve at this point in their career.

At home Gracie spends most of her time outside in a field with other horses, she gets muddy, eats normal grain (not even perfectly measured or weighed), doesn’t have strips of supplements a mile long, and has even been trained to rope cattle. Yes… she ropes cattle.

Tragedy struck again just two months ago. On August 14th, Stefanie’s beloved father, Fredde, passed away unexpectedly. He was her rock, her world, and shared her passion for horses. He was her everything. Her biggest fan, biggest support, and admired by many. Two days later, her horse Pilot died. They shared 23 years together, with an endless list of awards.

Although every day is a struggle just to keep a smile on her face, Stef never gave up on Phoenix and made sure they continued to work hard over the next sixty days before Finals.

Two days before they left to head to Harrisburg, PA., for the Pennsylvania National Horse Show/NAL Adult Jumper Finals, they schooled around a course of plain white jumps. They wanted to find something “scary” to practice over as it had been a while since their last show, Gracie has NEVER been in a large indoor (let alone a stadium setting), and this was Phoenix’s first time ever setting foot at Penn National or the WIHS in DC. They came up with one fence of plastic roping cow dummies set on their ends to second as jump standards – their fake horns holding the rail. It is probably safe to say most of the Olympians were not jumping the same thing 48 hours before the Pennsylvania National Horse Show!

Like many young riders, Phoenix is a full time student in college. She only gets to ride on days her schedule allows her to make the drive home to her trainer’s farm, and does not get to attend all the shows. Her and her trainer do all the work themselves – no grooms, no fancy shippers, and no special treatment. Gracie doesn’t even like wearing leg wraps. She is just a normal horse.

It is easy for many of us to get caught up in the world of horse shows, fancy horses, impressive pedigrees, and see many Amateur riders sitting pretty on their made horses. Sometimes we are lucky enough to have been in their shoes, and it is fair to say most of us wish we could! Some people can only dream and feel that those goals are so far out of reach it is not worth trying to climb. What is forgotten is all of those who are like Phoenix; those of us who started at the bottom and had to work hard with whatever we had. She has to make sure her horse’s manure stains are washed out every morning, while making sure her only pair of white show breeches stay clean. She has to memorize index cards for school between learning her courses, cheering on the young pony riders that make it around a course on a pony who is less than enthused, shove her toes into tall boots a size too small (the thought of breaking in a new pair doesn’t outweigh the thought of new blisters), and pack up the trailer to head home feeling lucky that she has even made it this far.

To those of you who started out on that naughty pony, have seen more dirt than ribbons, started on a green horse, lost someone special and kept yourselves from falling into darkness, show kindness to others regardless of who you are, what horse you ride, or what your past is… This is for you.

However Phoenix does in Washington, she is an amazing young woman on a horse not many could ride, trying hard and reaching for her goal. We can’t wait to see where these two are in a few more years! Congratulations on everything you have achieved.

Watch her NAL Adult Jumper Final round from the Pennsylvania National: 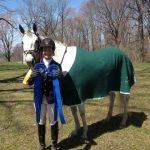 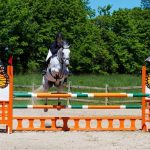 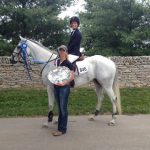 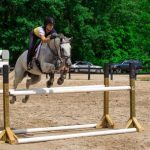