It’s Thursday and you just found what you believe to be the horse of your dreams — a thoroughbred available for purchase from her owner through a local re-homing organization. You call to make sure she’s available and find out she’s racing in a claiming race at Los Alamitos that Friday night! All day Friday you’re anxiously waiting to see what happens. She’s still entered in the race, what do you do? You go to the local bar to watch the race and root for her, of course! Deep down inside, you’re hoping she loses, because that would clearly signal she didn’t want to run anymore, her owners would feel motivated to find her a new home, and, like clockwork, you would be waiting to take her in. It would all work out perfectly… except instead of losing, she wins.

This is how things played out for Heather Jones when she found the perfect off-the-track-thoroughbred for herself, Sweet Potato Pie (aka: Pie), who last race at Los Alamitos on April 16, 2016.

Thankfully, for Jones, Pie didn’t get claimed and Sarah Parlier of Equine Racers — the re-homing organization responsible for placing Pie — notified her by phone that Pie was still looking for a new home. 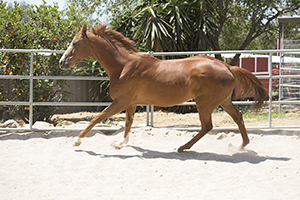 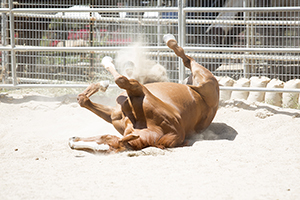 Meet Sweet Potato Pie, a 5-year-old Texas-bred mare by Drums of Thunder and out of Quite Literally (by High Demand). She debuted in April 2014 and retired with 16 career starts consisting of 2 firsts, 2 seconds, 4 thirds and a total of $13,003 in career earnings. 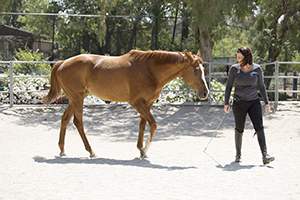 Pie following Jones around during a training session.

Today, the chestnut mare calls Heather Jones Show-Jumping home and has been enjoying just being a horse in her new surroundings. Described as being a bit antisocial upon the first few days, the downtime has helped her unwind. The behavior is nothing new to Jones, who has restarted several off-the-track-thoroughbreds (OTTBs) before Pie and specializes in retraining.

Two months after arriving, Pie has come out of her shell — she is very sweet and has a big personality, though she still won’t take any treats. She’s been working under saddle and has made wonderful progress at the trot and canter. “I’ve never cantered so fast in my life,” Jones said after a ride atop the mare. 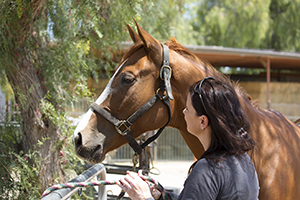 Transitioning a racehorse into a new career is a process that requires time and patience, but the result is extremely rewarding. It’s a project that requires expertise and should be approached with realistic goals for both horse and rider. Heather Jones has been retraining thoroughbreds for many years and knows a thing or two about the process.

“We’ve got some work to do,” she expressed. But she’s excited to have this gran-daughter of High Demand in her barn and can’t wait to see what the future holds for Sweet Potato Pie.

Heather Jones Show Jumping specializes in restarting thoroughbreds and has tailored lesson and training programs for horse and rider. Heather has participated in countless clinics and later worked with multiple trainers to expand her knowledge and advance her riding career. Her foundations and many accomplishments help her to understand the many responsibilities that come with owning, showing, and training horses and people. Heather Jones Show Jumping will be relocating to Paso Robles, CA in September of 2016.