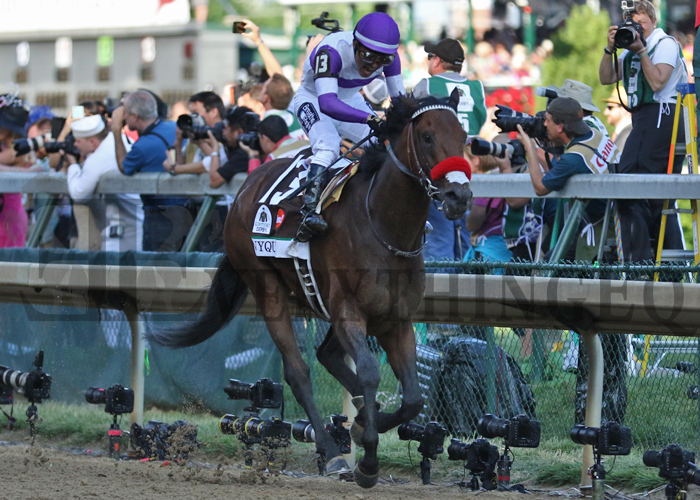 Entering America’s most illustrious horserace as an undefeated champion, expectations were set high for 2-1 Kentucky Derby favorite Nyquist and he delivered. Surviving a hot pace, a field full of closers and the overwhelming roar of 167,227 spectators – Nyquist galloped to win the 142nd running of the Kentucky Derby, holding off Desormeaux-trained Exaggerator, who settled for second. 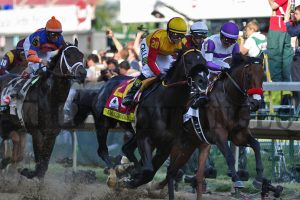 The colt, expertly piloted by jockey Mario Gutierrez, used early tactical speed to get ahead of the 20 horse charge. Settling in second behind a sound barrier breaking Danzing Candy who set fractions of :22.58, :45.72 and 1:10.40 before giving up the lead to Gun Runner early in the final turn. Heading into the stretch Gutierrez called upon Nyquist’s speed and opened up a margin of about three lengths. Hot in pursuit was rival Exaggerator, but Nyquist was able hold off the late charge by a length to win the Derby in 2:01.31 – the 13th fastest in the race’s history.

“Like I say, if anybody watches Nyquist’s races, you will see that he will not allow any other horse to pass him. He’s the 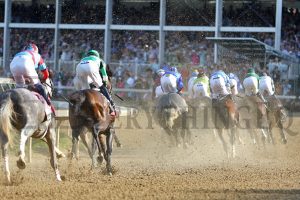 kind of horse that always has something left for whatever comes to him late,” said Gutierrez. “So he is able to win by five lengths. He’s been able to win by a nose. So that’s how I get so much confidence from him. Because, if anybody comes late, I know he’ll have something to respond to that.”

Collecting the first jewel in racing’s Triple Crown is the start of a familiar adventure for Nyquist’s connections. The team consisting of trainer Doug O’Neill, owner Paul Reddam of Reddam Racing and jockey Mario Gutierrez went through this with I’ll Have Another four year ago. The dream ended the day before the Belmont when they had to scratch him due to tendonitis – but hope has been reignited by Nyquist. 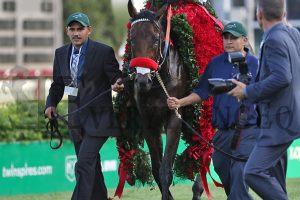 “He’s just a special horse. I mean, I think now it’s safe to say, Lava Man is unbelievable and I’ll Have Another is unbelievable. But he’s definitely the best horse I have ever been around,” said O’Neill. “Johnny Garcia (exercise rider), who gets on him every day, he’s been saying for a while now that this horse is so strong and does everything so easy and, you know, he’s never tired. It doesn’t seem like we have ever really gotten to the bottom of him. That’s very exciting for the future. And, again, like every other athlete, you just got to stay injury free. A lot of ice. A lot of prayers. A lot of Elias (groom). And that’s all good.”

Nyquist departed Churchill Downs today, Monday, May 9th, as one of six horses that will run at Pimlico in Baltimore, Maryland. The colt is expected to start in the 141st running of the Preakness Stakes on Saturday, May 21st. O’Neill will rejoin the colt later this week.

Subscribe to receive the Weekend Wrap-Up and get the weekend’s best stories delivered right to your inbox.