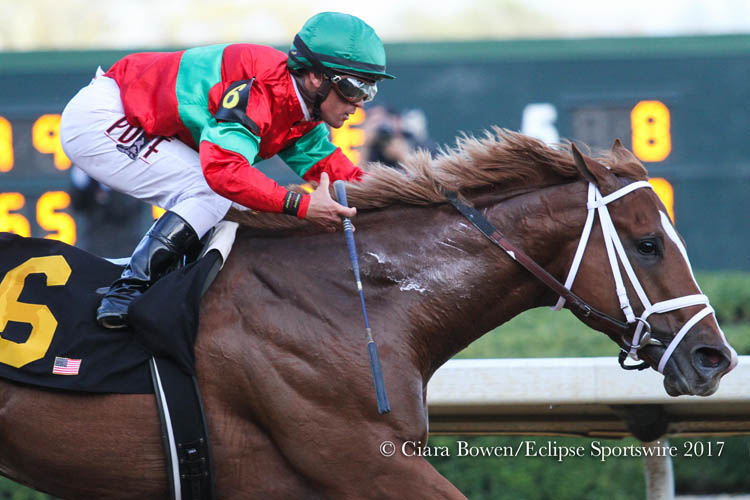 Sumaya U.S. Stable’s Malagacy handled himself like the ultimate professional Saturday, March 18, as he won the $900,000 Gr.2 Rebel Stakes at Oaklawn Park by two lengths. It was just his third start.

Like he has in each of the other local prep races, Oaklawn-based Uncontested took the lead early in the Rebel while Malagacy rated in second with Royal Mo on his outside in third. Uncontested took them through a quarter in :23.03 and a half-mile in :47.04, but he could not maintain his position up front as they came into the far turn. Malagacy, under jockey Javier Castellano, began to move up and overtook the leader. Behind them, American Anthem appeared to be launching a move but it was of no effect. Malagacy and Castellano put the field behind them to hit the wire as the clear winners, but it was a little more murky behind them as Sonneteer and Untrapped battled for second place honors. Sonneteer, who went off at 112-1, earned the position by a nose.

“He doesn’t do anything wrong, very impressive the way he did it today,” Castellano said after the race. “I rode with a lot of confidence.”

Trainer Todd Pletcher did not race Malagacy at 2, waiting until early January to debut him. The chestnut son of Shackleford did not disappoint as he soared to the wire 15 lengths ahead of the field in a 5 ½ furlong maiden special weight at Gulfstream Park. His second start came February 12 in a 6 ½ furlong allowance optional claimer at Gulfstream, where he won by seven lengths. The Rebel brings his record to a perfect 3-for-3 with earnings of $586,800.

“He was so impressive in his first two starts that [sending him to the Rebel] wasn’t a question of talent,” said Pletcher. “It was just a question of handling different things and one of those was shipping from his Florida base to Hot Springs, and he handled that well. Of course, the other questions were stretching out around two turns and stepping up into graded stakes company.”

Neither gave Malagacy any issues and he exited the race with 50 points on the Road to the Kentucky Derby, placing him in fourth on the leaderboard.

“The Grade 1 Arkansas Derby would be the logical next step,” Pletcher stated. “The Arkansas Derby timing-wise would be good, and getting a mile-and-an-eighth race under his belt would also be beneficial.”

Malagacy was bred in Kentucky by John Trumbulovic and is out of the Dehere mare Classiest Gem. He was purchased for $190,000 by agent Steve Young at the 2016 Fasig-Tipton Midatlantic Two-Year-Olds in Training Sale, where he was consigned by De Meric Sales.