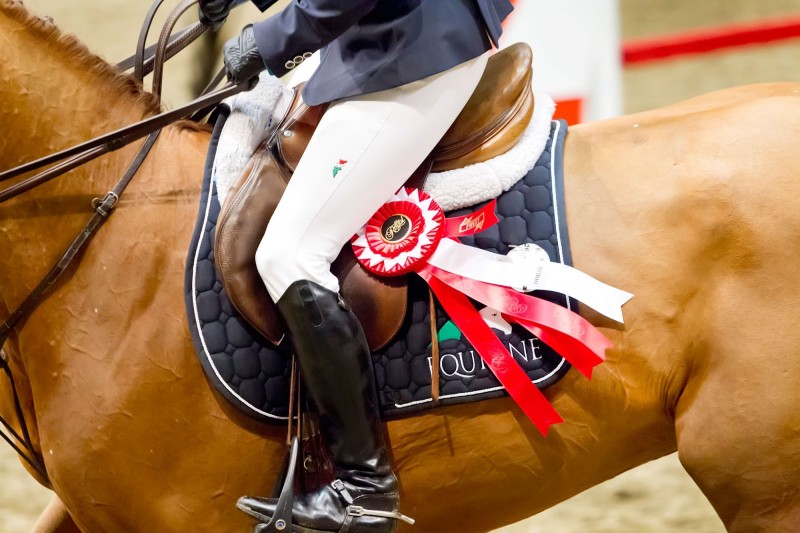 Jessica Blum, of Gormley, Ontario, and her mount Born To Be, an eight year old gelding, took home the first place ribbon in both phases of this years Royal Invitational medal classes. This was Blum’s first year competing in the medal classes at The Royal. “It’s pretty exciting to  have won” said Jessica, who rode to a well deserved victory in a very competitive class of 16 riders from across Canada.

Blum started out riding in summer camps and eventually found a barn within close proximity to her family’s cottage in Muskoka, ON., where Susan Craig helped her buy her first pony. In 2009 Jessica began competing at The Royal Agricultural Winter Fair in the large pony division.

The 17 year old trains with Canadian Team Member Chris Sorensen, who works in partnership with Darcy Hayes. Jessica has been under the tutelage of Sorensen for the past five years.” We’re pretty close, he knows me really well and how to help me prepare.” Blum said of her trainer. ” He understands the mental state I need to be in order to do my best.” Hayes, whom has trained numerous riders to big titles at The Royal, is new to the team but has played a major role in Blum’s  success both in daily training and in competition.

This was Jesica’s last equitation class, but her future plans are to compete in the jumper divisions. “I guess this is a good way to finish,” said Blum, who has an ambitious goal of competing at the 2015 NAJYRC.

Her advice to up and coming riders? “Commitment and hard work are extremely important. Be resilient and believe in yourself through the good times and the bad.”

Congratulations to Jessica Blum and the team at Sorensen Stables.