Irish War Cry Back to Winning Form in Wood Memorial 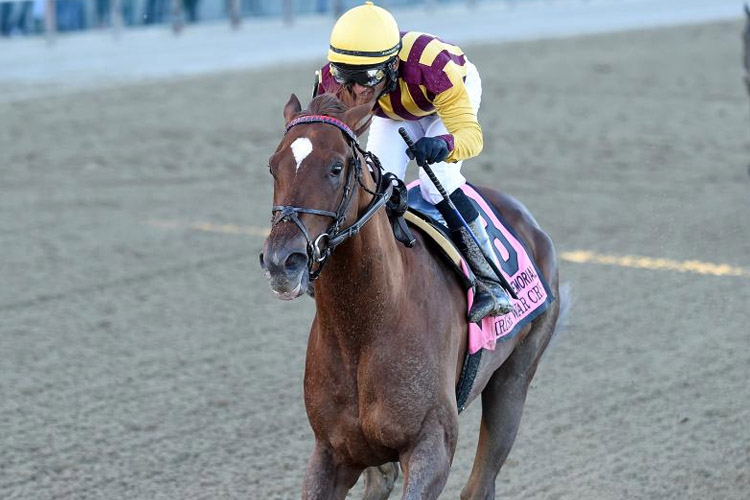 The flashy chestnut son of Curlin wowed his fans with his victory in the Holy Bull before putting in a disappointing performance in the Fountain of Youth last month, leaving trainer Graham Motion puzzled. “I don’t know what happened last time,” Motion said. “(But) it’s extremely gratifying to get this horse back on track. That was huge. I don’t remember having a situation like this, when I felt so much was on the line.”

Todd Pletcher trainee Battalion Runner set out with the lead early while Irish War Cry and jockey Rajiv Maragh were three wide into the first turn, and ran the opening quarter-mile in :23.50 and a half in :47.34. At the three-quarters mark the two were even, but Irish War Cry took command into the stretch and drew away. Battalion Runner finished second with Cloud Computing another 3 ½ lengths back in third.

“I think Rajiv must have felt like he had a lot of horse, because he moved to the leaders so confidently,” said Motion. “He probably could have waited a little longer if he had needed to. It seemed like he had a lot of horse. I think the equipment change (to the figure-eight bridle) probably helped. It gives you a little more control. But he had the perfect trip today.”

“He was sharp into the first turn,” Maragh said after the race. He won the 2014 Wood Memorial aboard Wicked Strong and suffered severe injuries in a spill in 2015. “There was a little pace in front of him, which is what we were hoping for to get in a good tracking position. He was always in a smooth rhythm. He relaxed real easily. He did everything I wanted him to do without a lot of effort. He did it all in rhythm. He wasn’t rank at all. He settled beautifully.”

Irish War Cry is a New Jersey bred homebred out of the Polish Numbers mare Irish Sovereign. He broke his maiden in his debut at Laurel Park in November and followed that success with a win in the Marylander Stakes over the same oval December 31. His 2017 debut came in the February 4 Holy Bull Stakes at Gulfstream Park, which he won. Saturday’s win brought his record to four wins from five starts and boosted his earnings to $699,460.

Click here for more on this year’s Kentucky Derby horses.