Apologynotaccepted took the lead out of the gate and took the field through a quarter in :24.26 and a half in :48.71 as Forever Unbridled ran in fifth under jockey Joel Rosario. The leader opened up by a length and a half off the turn but could not fend off Forever Unbridled, who went four wide around the turn and reeled her in.

“She’s a true racehorse,” trainer Dallas Stewart said. “That’s what they’re supposed to do. Coming off a seven-month layoff, we just had to run her and see where her fitness level was.”

“She’s a tremendous horse,” said Rosario. “I got her settled early and when we went by the half-mile pole, she was moving so easy. I just nudged her a bit and she took off. Dallas got her ready and did a tremendous job with her. To be able to ride a horse with this much class is such a blessing. I can’t wait for what’s next.”

Forever Unbridled was bred in Kentucky and is out of the Kentucky Oaks winning mare Lemons Forever, a daughter of Belmont Stakes winner Lemon Drop Kid. The Fleur de Lis was part of the Breeders’ Cup Challenge “Win and You’re In” series, awarding her a spot in this year’s Breeders’ Cup Distaff. It was her fifth graded stakes win and sixth overall. Additionally, she has 3 seconds and 4 thirds from 15 starts with earnings of $1,711,880.

“We’ll probably (aim for) one at Saratoga (Race Course), maybe one at Belmont (Park). We’ll talk to Mr. Fipke and see what makes sense. He’s the breeder, the owner, he’s put a lot into it, and he’s a really great guy to work for,” Stewart said. “How lucky are we to have such an unbelievable horse like this in our barn? I told Joel to get her settled early and keep her out of trouble. He was barely moving on her and she won easily. We just need to keep her happy and healthy, and we’ll have her ready for the Breeders’ Cup.” 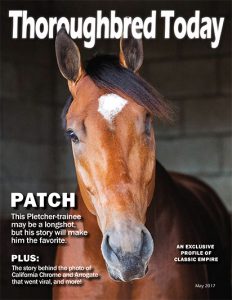 Thoroughbred Today magazine is an exciting new publication made specifically for horse racing fans. Get to know the stars of our sport through exclusive profiles and interviews; learn about second careers available to equine athletes; let our storytelling and stunning photography take you behind the scenes in a way no other publication will. Become a part of horse racing with Thoroughbred Today magazine.

Subscribe today for a chance to win a signed copy of our May issue featuring third place Belmont Stakes finisher Patch!