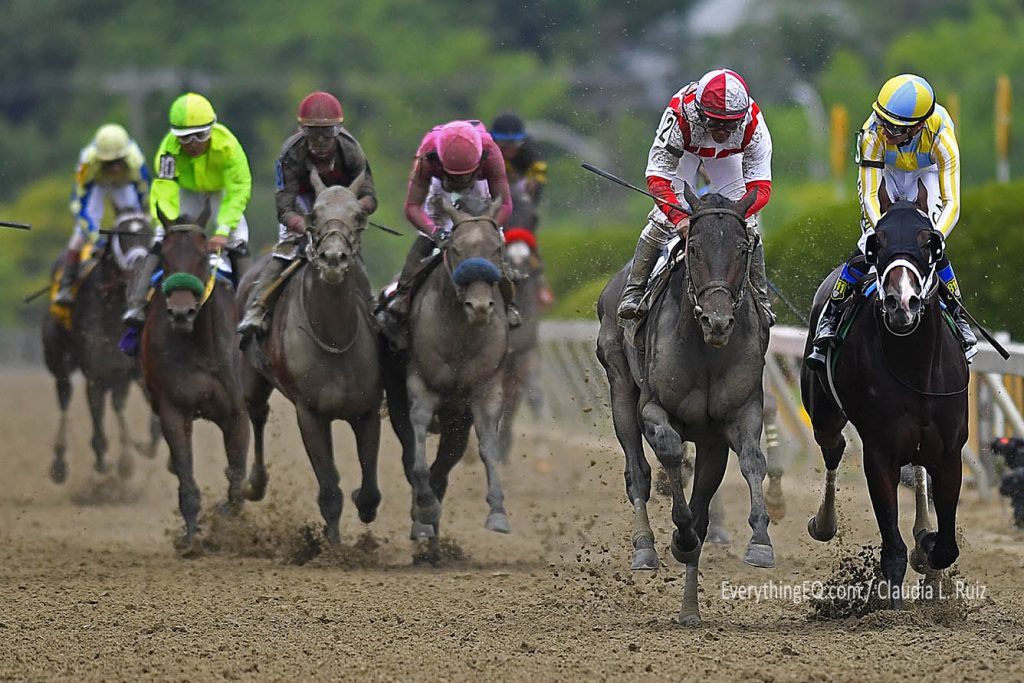 Klaravich Stables, Inc. and William H. Lawrence’s three-year-old colt Cloud Computing entered the second jewel of the Triple Crown a bit under the radar but he didn’t leave it that way; the dark bay colt closed impressively to wear down Classic Empire to win the Gr.1 Preakness Stakes by a head.

The focus was on Kentucky Derby winner Always Dreaming and two-year-old champion Classic Empire in the days leading up to the race and those two held the attention of the crowd as they dueled through the majority of the race. Always Dreaming went straight to the lead out of the gates under jockey John Velazquez and was followed immediately by Classic Empire and jockey Julien Leparoux. Cloud Computing tracked along in third as the leaders ticked off fractions of :23.16 for the first quarter and :46.81 for the half. Always Dreaming could not maintain his position and dropped back. Near the five-sixteenths mark, Classic Empire went clear and briefly looked to be the winner. Mid way on the final turn, however, champion reinsman Javier Castellano looked to have plenty of horse. With a furlong to go, the pair had three lengths to make up to catch Classic Empire, but with ground eating strides, they collared him and got up for the win.

The final time for the mile and one-sixteenth race over a fast track was 1:55.98.

“I’ve been training now for 10 years. We’ve run four horses in the Derby. This is our first Preakness try,” said trainer Chad Brown. The victory was his first in the Triple Crown series. “But I personally put a lot of time in, and my staff has put a lot of time in. When you add the time as an assistant trainer, for two great trainers, it feels like I’ve been doing it forever, really. So I don’t take it for granted.”

Always Dreaming faded to eighth but according to trainer Todd Pletcher scoped clean and returned to the barn in good order. Pletcher also remarked that he believed the two-week turnaround time was a little too quick for his colt.

“I’m not going to dispute the fact that I brought in a fresh horse as part of our strategy,” Brown said. “Our horse is very talented, too. Classic Empire and Always Dreaming are two outstanding horses and our strategy was, if we were ever going to beat them, let’s take them on two weeks’ rest when we have six, and it worked.”

Cloud Computing is from the first crop of Maclean’s Music and is his first classic winner. The colt was bred in Kentucky by Hill ‘n’ Dale Equine Holdings and Stretch Run Ventures and is out of the A.P. Indy mare Quick Temper. He was purchased for $200,000 at the 2015 Keeneland September Yearling Sale, where he was consigned by Hill ‘n’ Dale.

From four career starts, Cloud Computing boasts two wins, a second, and a third for earnings of $1,071,000.

Brown was not willing to commit to the Belmont Stakes but did not rule it out, saying that he would consider it. “We were just going to take it race-by-race with this horse,” he said. “We’re going to see. Do I think he’s a mile-and-a-half horse? He’s never really struck me that way, but I’m not going to rule it out. Let’s see how he comes out of it and who is running and get a feel for it. I’ll leave it as a possibility right now.”