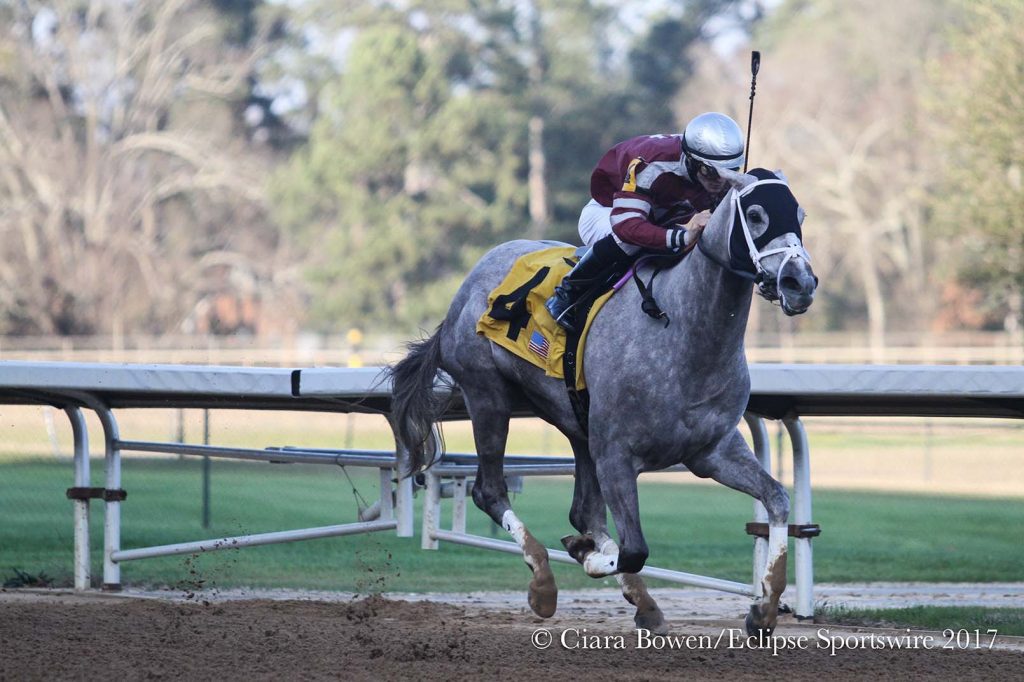 Despite winning the January 21 Dixie Belle Stakes by a solid 2 ½ lengths, Chanel’s Legacy left the gates on February 11 with double digit odds. She rewarded her backers, however, taking the $125,000 Martha Washington Stakes by the same margin.

Perfect Wife snatched the lead at the start and blazed through fractions of :23.51 and :46.90 while Chanel’s Legacy, with jockey Alex Birzer aboard, settled in second behind her. Coming around the far turn, Chanel’s Legacy made her move and drew off as they came down the stretch to hit the wire decidedly ahead of her competition. My Sweet Stella was taken up suddenly during an attempt to go between horses on the turn, but ran on to finish second, 3 ¾ lengths ahead of third place finisher Torrent.

“She ran huge,” Birzer said of his mount. The jockey won two races on Saturday’s card, bringing him within five spots of his 3,000-victory milestone. “She put me in a great spot. She just sat there as the leader weakened. She just picked it up an extra notch and kept at her business.”

“It’s very good, because she is ratable,” trainer Lynn Chleborad said. “And they did go pretty quick fractions when they go :23 ⅖ and :46 ⅘. That’s not exactly walking the dog, you know – I think that’s kind of fast. I’m like, ‘Oh, I hope she has enough to finish.’ She just kept going. She trains like that in the morning. She was ready for this race, and I feel we had her as good as we could get her. She showed she can do that.”

Just as the Kentucky Derby preps, The Martha Washington offered points toward the Road to the Kentucky Oaks on a 10-4-2-1 basis. Chanel’s Legacy now stands in 6th place on the leaderboard with a total of 11 points.

A homebred for Poindexter Thoroughbreds LLC, Chanel’s Legacy is by Dominus and out of the Value Plus mare Chanel Number Mine. The grey filly broke her maiden second time out, going six-furlongs on dirt at Remington Park in early September. She currently boasts 4 wins and a third place finish from 7 starts. Saturday’s win boosted her earnings to $234,394.

The Gr.3 Honeybee Stakes on March 11 is the likely next start for the Iowa-bred, who is targeting the Gr.3 Fantasy Stakes on April 14.