Reeves Thoroughbred Racing is pleased to announce that a deal has been reached with Gunpowder Farms and West Point Thoroughbreds to run BREAKING LUCKY in their starting gate position for the inaugural running of the $12 million Pegasus World Cup Invitational to be held on January 28 at Gulfstream Park. 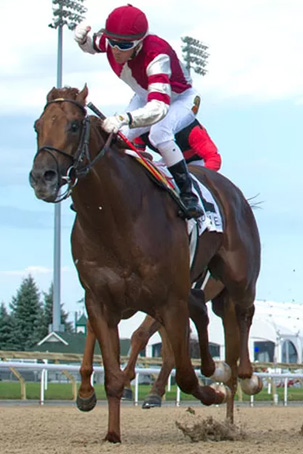 “We are thrilled to partner with Reeves Thoroughbred Racing and West Point Thoroughbreds for the Pegasus World Cup!” says Keithley.

According to Terry Finley, President & CEO of West Point Thoroughbreds, “we bought in earlier this week knowing it was a good chance to run in the Pegasus”.

Breaking Lucky is the 5-year-old chestnut son of Lookin At Lucky, out of Shooting Party by Sky Classic. Foaled in Ontario, Breaking Lucky won the Grade 3 Seagram Cups Stakes on 8-1-16 at Woodbine, and the Prince of Wales Stakes in Fort Erie. Most recently, he was second in the Clark Handicap to Gun Runner. He was ridden by Luis Contreras, and is trained by Reade Baker.

Reeves Thoroughbred Racing has partnered with RA Hill Racing and Eric Young in their Stakeholder Position for the Pegasus World Cup.

The team is thrilled to welcome BREAKING LUCKY to the richest horse race in the world!