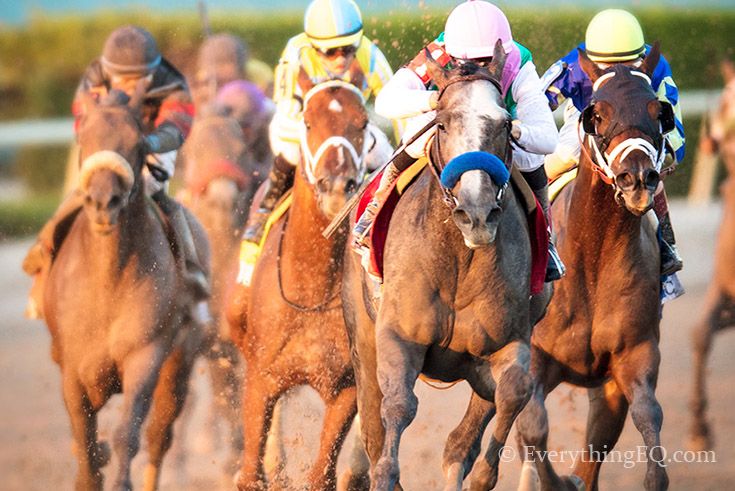 Juddmonte Farm’s sensational late bloomer, Arrogate, continued to impress his fans and horsemen on Saturday, January 28, as he soared to a dominant victory in the inaugural running of the $12 million Gr.1 Pegasus World Cup Invitational Stakes. Hailed by many as the second and final rematch between the Breeders’ Cup Classic winner and two-time Horse of the Year, California Chrome, the race was highly anticipated across the entire nation, with little attention given to the rest of the field.

Arrogate and California Chrome bookended the field from posts 1 and 12 respectively, and both broke from the gate in good order. It was Noble Bird who took the lead, however, and set fractions of :23.46 and :46.14 while Arrogate tracked him from third under jockey Mike Smith. California Chrome, with longtime partner Victor Espinoza up, ran along in fourth after being forced to go wide through the first turn. As the field approached the final turn, Noble Bird began to fade and Smith tipped his mount toward daylight. He did not disappoint, gaining the lead easily with his large stride.

“Once I got out going into the far turn, I knew we were going to be very tough to beat,” Smith remarked. “He had a lot of run today and I was very happy.”

Smith and Arrogate quickly put the field behind them while California Chrome uncharacteristically seemed to be put in reverse. The large grey colt hit the wire 4 ¾ lengths ahead of late closer Shaman Ghost and was reportedly geared down for the final 100 yards. The final time for the 1 ⅛ mile race over the fast track was 1:47.61.

“He just ran his race,” trainer Bob Baffert said of his colt. “I kept waiting for the matchup with Chrome, but he just didn’t bring his race today. It’s too bad.”

The popular chestnut faded to finish ninth in the last race of his stellar career and was later diagnosed with fluid in his right knee. Trainer Art Sherman stated that the issue did not seem to be anything major but the stallion will be examined upon arrival at Taylor Made Farm.

“He was just empty today,” Espinoza said of his mount. “At the first turn I thought I was good, but when we hit the five-eighths, he just completely shut down. I couldn’t keep up with the ones in front of me. He started backing up and just wasn’t the same. He’s done a lot. Sometimes he’s going to throw in one of those bad races and one of those bad times was today.”

While plans for the older stallion are to begin his new career in the breeding shed in a few weeks, the connections of four-year-old Arrogate are less certain about where they will go from here, although they do hope to make it to the Breeders’ Cup Classic once again.

A Kentucky-bred son of graded stakes placed mare Bubbler (Distorted Humor), Arrogate is by influential stallion Unbridled’s Song. He was consigned by his breeders, Clearsky Farms, at the 2014 Keeneland September Yearling Sale, where Juddmonte bought him for $560,000.

Unraced at 2, the colt had a bit of a late start, making his debut in April of his sophomore year. It was too late for him to make the Kentucky Derby, but Baffert had no need to worry. In August, he sent the colt to New York to make his stakes debut in the Gr.1 Travers, where he proceeded to run the fastest edition of the race’s history. He worked up to the Breeders’ Cup Classic, where he ran down California Chrome and began the brief rivalry between them. From his 7 starts, he has 6 wins and 1 third. The Pegasus boosted his earnings to $11,084,600.