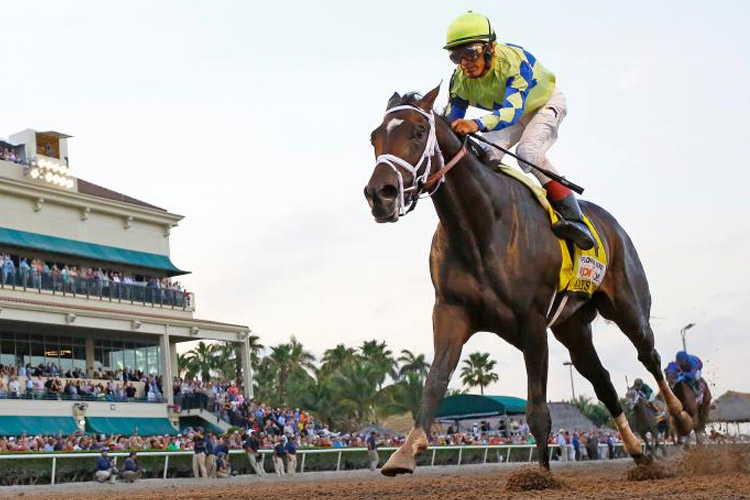 Life in the racing industry is full of hopes and dreams, namely of roses and the first Saturday in May, and the aptly named Always Dreaming looks to fulfill those for his owners. The colt, who is from Bodemeister’s first crop, was the clear winner of the $1 million G1 Xpressbet Florida Derby at Gulfstream Park on Saturday, April 1 as he crossed the wire 5 lengths ahead.

Three Rules took the lead early to set the pace while being tracked by Always Dreaming, ticking off times of :23.28 for the quarter-mile and :47.08 for the half. As the field ran through the far turn, Always Dreaming and jockey John Velazquez began to move their way up to be on even terms with Three Rules. The latter gave up his lead at the top of the stretch and looked to hold on for second but eventually flattened as Always Dreaming put on a show up front, pulling away easily. State of Honor followed in second, with Gunnevera another five lengths behind in third.

From five career starts, Always Dreaming boasts three wins — all this year. He debuted last July at Belmont Park, where he finished third in a maiden special weight, and followed that with a second place finish in another maiden special weight at Saratoga in August. He broke his maiden in his sophomore debut at Tampa Bay Downs in late January, following that up with another victory in an allowance optional claiming race at Gulfstream on the undercard of the Fountain of Youth. From those five starts he has earned $648,900.

Always Dreaming scored 100 points from the Florida Derby, placing him in third on the Kentucky Derby leaderboard.

“I think the whole program really helped today. We brought him along gradually, opted for the allowance race on Fountain of Youth day, and I think that all paid off,” trainer Todd Pletcher said. “The horse has been training exceptionally well and we were confident he was going to run as well as he’s capable of, and thankfully he did.”

“When we saw him making the turn, we knew he had a lot of horse, and we knew that’s how he likes to run,” said Anthony Bonomo, principal of Brooklyn Boyz Stable, who owns Always Dreaming with several others. “We thought he had enough to come home and win, and there’s nothing like watching your horse pass the finish line. It’s exciting. It’s really a great race. I’ll think about (the Kentucky Derby) in about nine hours. Right now this was a great win and we’re just thrilled. He’s a good horse.”

Always Dreaming was bred in Kentucky by Santa Rosa Partners and is out of the In Excess mare Above Perfection. He was consigned by Dromoland Farm at the 2015 Keeneland September Yearling Sale, where Steve Young acted as agent to purchase him for $350,000 on behalf of Brooklyn Boyz Stable, MeB Racing Stable, Teresa and Vinnie Viola, West Point Thoroughbreds and Siena Farm.

Want to know what Todd Pletcher has to say about Always Dreaming? Check out Thoroughbred Today magazine’s May issue to find out, CLICK HERE!