Mo Town on the Rise in Remsen

Mo Town became the latest stakes winner for hot sire Uncle Mo on Saturday when the 2-year-old colt coasted to victory in the $300,000 Gr.2 Remsen at Aqueduct. It was the stakes debut for the bay, who had just come off a 7-length victory in a maiden special weight at Belmont in late September.

After the start, Takaful shot to the lead and opened a three length lead. He took the field through a quarter mile in :23.47. Mo Town, under jockey John Velazquez, ran in third through the first quarter and inched closer to his competition through the half-mile in :48.84. Takaful remained in the lead through the six furlong mark but then relinquished his lead. Mo Town took command and opened a clear lead in the early stretch. He hit the wire 2 ½ lengths ahead of a wide-rallying No Dozing, while Takaful was another 3 ½ lengths back in third. The final time for the 1 1/8-mile race was 1:51.58.

Mo Town is out of Grazie Mille, a winning daughter of Bernardini, and is the mare’s first starter. From three starts, the colt has two wins and a second for earnings of $243,600. The Remsen is a prep race for the Kentucky Derby and awarded 10 points to the winner, 4 to second, 2 to third, and one to fourth. Tony Dutrow, who trains Mo Town for owners Susan Magnier, Michael Tabor, Derrick Smith, and Team D, plans to send the colt to Florida for the month of December and may return him to New York for the Gotham Stakes early next year. 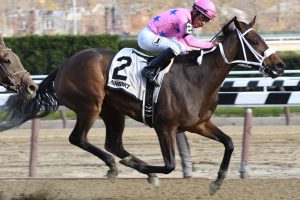 Miss Sky Warrior continues to improve as she gains experience. The two-year-old filly owned by Arlene’s Sun Star Stable held on to win Saturday’s $300,000 Gr.2 Demoiselle Stakes by a half-length, gaining her second stakes victory – her first came in the Gr. 3 Tempted Stakes on November 5 at Aqueduct.

With jockey Paco Lopez in the irons, Miss Sky Warrior snatched the lead from the start, showing the same early speed she displayed in her previous starts. She took her competitors through fractions of :23.65 and :48.82 with slight pressure on her outside from Libby’s Tail. As the field came around the final turn Jamyson ‘n Ginger made a bid three-wide but could not catch the leader. Miss Sky Warrior opened up a few lengths down the stretch but could not sustain the margin; despite tiring she held on to win by half-length in 1:53.34.

Miss Sky Warrior is by First Samurai and is out of the Conquistador Cielo mare Sky Minister. From four starts she has three wins and earnings of $348,750. The Demoiselle is a prep race on the Road to the Longines Kentucky Oaks and awarded points to the top four finishers – Miss Sky Warrior picked up 10 points with this weekend’s victory. Trainer Kelly Breen stated that the filly will receive some time off and will likely make her 3-year-old debut at Gulfstream Park in February. 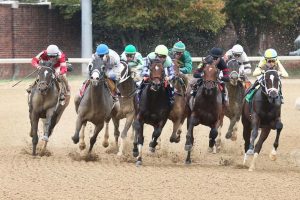 Under jockey Brian Hernandez, McCraken went off as the 4-5 favorite and was unhurried at the start as Uncontested took the early lead. The latter led through a quarter in :23.45 and a half in :47.38 before shifting out in the turn and faltering down the stretch. McCraken broke from post 11 in the field of 12, but was angled in by Hernandez through the first turn.

The pair rated outside in 9th then began to split horses as they rounded the turn. Wild Shot pressed the pace earlier and briefly took the lead inside the eighth pole, but couldn’t maintain it. McCraken took over and hit the wire clear of the rest. The final time for the race was 1:44.15.

McCraken is a 2-year-old son of Hall of Famer Ghostzapper and is out of the Seeking the Gold mare Ivory Empress. Since breaking his maiden by 2 ½ lengths on October 2 at Churchill Downs, the colt boasts earnings of $190,848 in just three starts. Trainer Ian Wilkes has no immediate plans for the his next start. McCraken picked up 10 points towards the Kentucky Derby and sits in 7th on the Road to the Kentucky Derby standings – currently headed by Classic Empire. 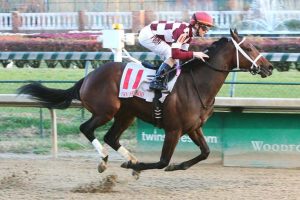 Farrell, a homebred trained by Wayne Catalano for Coffee Pot Stables, won the $200,000 Gr.2 Golden Rod Stakes at Churchill Downs by 6 lengths on Saturday, defeating eleven other fillies in her first stakes attempt.

Under the guidance of jockey Channing Hill, Farrell broke fast and went to the lead early in the 1 1/16 mile race for 2-year-old fillies. She took the field through :23.89, :48.33, and 1:13.80 through the six furlong mark, while Lovely Bernadette and Gris Gris ran close behind her in second and third, respectively. On the final turn, Farrell led by two lengths and continued to pull away to hit the wire well ahead of second place finisher Daddys Lil Darling, winner of the Gr.2 Pocahontas Stakes, and Ever So Clever finished third. The final time for the race was 1:44.26.

Farrell is by Malibu Moon and out of Rebridled Dreams, a graded stakes placed daughter of Unbridled’s Song. From four starts, Farrell has two wins and a third for earnings totaling $151,357. Trainer Wayne Catalano said he will most likely run the filly at Fair Grounds next. Farrell paid $23.00 to win and earned 10 points towards the 2017 Longines Kentucky Oaks.